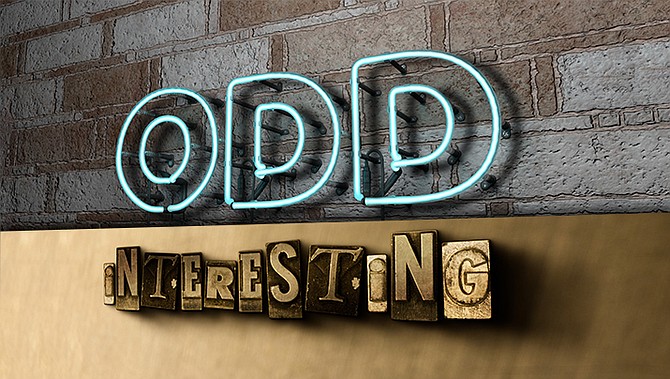 Stories this photo appears in:

Nearly 60,000 bees have been stolen from a grocery store company’s field in Pennsylvania, the company said.

Judge apologizes for wishing jail on man with weedy yard

A Detroit-area judge has apologized for wishing that she could send a 72-year-old immigrant with cancer to jail for a weedy property.

A German shepherd named Tinsley, first thought to be a lost dog, successfully led New Hampshire state police to the site of its owner’s rollover crash.

Parts of the Florida Panhandle got a dusting of snow early this week after temperatures dropped dramatically from the previous day when the thermometer was at typical beach weather.

A 58-foot-long pedestrian bridge stolen from an Ohio city last month has been found and a man is facing charges, police said.

Christmas came early — or really late, depending how you look at it, when a physics professor at the City College of New York in Harlem discovered a box postmarked in 2020 in the school’s mailroom, holding $180,000 in cash.

Authorities say a coyote who climbed to the top of a Charleston bridge managed to elude animal control officers who tried to capture it.

Missing the point: Man in Germany drives to driving test

A man in Germany has discovered the hard way that it’s best to get a driving license first before trying to use it.

A Florida family is in trouble with their homeowners association for putting up their Christmas lights too early.

A 10-point buck sought sanctuary inside a southern Michigan church on opening day of the state’s firearm deer hunting season.

Three sisters in Florida share the same birthday, but they’re not twins or triplets.

A Tennessee entrepreneur whose hot tub on wheels is one of downtown Nashville’s best-known party vehicles has been told to stop operating a public swimming pool without a permit, a lawsuit says.

A 28-year-old man in Germany faces a hefty bill after trying to catch a flight at Munich airport Thursday, Sept. 30, with a live mortar shell in his rucksack.

A Danish artist who was was given a pile of money by a museum with which to create a piece of artwork, submitted two empty canvases — titled “Take the Money and Run.”

Bonus checks bounce for 50 Florida teachers due to error

German police say they have solved a burglary case at a kindergarten after a storytelling gadget the suspect had swiped revealed his location.

A Michigan lawmaker ordered to jail in a drunken driving case is accused of taping a handcuff key to his foot.

A Florida man won $1 million in a lottery game the same day he and his wife opened an auto repair shop.

A man fed up with a private road in poor condition near his southwest Florida business has a novel solution: plant a banana tree in a pothole to warn motorists away.

A Maine landlord arranged for the rescue of 15 tarantulas and one python that had been left behind by a tenant.

A judge has ordered a western Michigan couple to pay $30,441 to their son for getting rid of his pornography collection.

A North Carolina couple split a nearly $1 million lottery jackpot thanks to two identical tickets, a sudden windfall the pair say they will put to good use.

A 29-year-old Tennessee man who rode on a school bus and walked into a high school with students has been charged with trespassing, officials said.

No job is too small for Hamburg police.

The FBI is investigating what one commercial airline pilot said might have been an airborne person with a jetpack, high in the busy skies near Los Angeles International Airport.

Woman unaware she had $39M lottery ticket in purse for weeks

Lottery officials say a woman in Germany carried a winning ticket in her purse for weeks without realizing it was worth about 33 million euros ($39 million).

A sheriff’s deputy hoofed it for 3 miles along a two-lane Michigan road to help guide eight wayward cows back to a farm.

Authorities say they’ve been searching for a 12-foot python that escaped from its enclosure inside Louisiana’s largest shopping mall.

Man bitten by neighbor’s escaped python in toilet in Austria

A man in Austria was bitten by a 5-1/4-foot python during an early-morning visit to the toilet at his home on Monday, July 5, police said.

Trying to fill this dumpling order left one business in a pinch: A common but disruptive shipping error sent a custom dumpling-making machine manufactured in China to the wrong Portland in May.

Arson arrest; woman said fires were to get rid of snakes

A Louisiana woman accused of setting fires told investigators she and her boyfriend were trying to get rid of snakes, the state Department of Agriculture and Forestry says.

A Florida couple came up with a great way to meet their new neighbors after moving into their home during the coronavirus pandemic. They offered free beer.

A car thief who found a toddler in the backseat of a stolen vehicle drove back and chastised the mother for leaving the child unattended before taking off again, police in Oregon said.

Two fishermen have rescued a naked fugitive who they found sitting on a tree branch in Australian crocodile habitat.

A northern Indiana man whose cash-filled wallet was accidentally thrown out got it back last week after a crew waded through tons of trash and found it, wet and smelly, near the bottom.

Police in South Florida descended on what they thought was an armed break-in at a men’s clothing store Tuesday morning after people were spotted storming in with rifles — but officers arrived to find a music video filming, all with the store owners’ knowledge.

A man who crashed his car into a Montana grocery store and fled the scene was later arrested after running nude through a nearby retirement home, police said.

A man who was in a traffic accident stole the car of a good Samaritan who had stopped to help him, Puerto Rico police said Thursday.

What is a 104-year-old woman to do if she wants to visit family members but can’t sit in a car for a long period of time?

A man with a metal detector has found a long-hidden, 222-year-old coin under a few inches of soil outside a church in Maine.

The dean of South Carolina’s largest law school is apologizing for forwarding an email that contained the names of students who failed the exam to become a lawyer and the confidential bar exam grades of every student.

Snake lands on Mississippi woman as she opens her front door

A woman in Mississippi received a slithering surprise when she got home from work last week: a snake that had been lodged on top of her front door landed on her head.

Voter bares arms, and more, after anti-Trump shirt is nixed

A voter who was told she couldn’t wear an anti-Trump shirt at a polling place because it violated electioneering rules simply whipped it off and did her civic duty topless.

German police called to the scene of a suspected shooting found a man who had fallen asleep with an action film running at top volume on TV.

A state appeals court has overturned its own ruling and decided “bikini latex clubs” are sexually oriented businesses that are subject to a $5-per-patron state tax.

The mother of a baby born on an airplane that was taking her to a hospital in Anchorage has named her son Sky because of his unique birth and first experience.

Vermont State Police troopers have returned to its rightful owner a shotgun stolen during a burglary in 1994 in the town of Albany.

he owner of a pizza shop used his available resources to fend off a robbery attempt by a man with a machete outside his store in Delaware, police said.

File it under pizza toppings only offered in Florida. State inspectors found an 80-pound iguana stashed in the freezer at a local pizza joint.

A Georgia city councilman was charged after he allegedly stole a beef tenderloin from a grocery store.

A fox that was attacking a Maine woman quickly found its goose was cooked when she wrestled into a pot meant for scalding chickens.

Residents of a remote Bering Sea island are celebrating the death of an intruder that had eluded capture for 10 months — a Norway rat.

Lithuanian police say a private circus owner has released a bear from a cage after a standoff with police trying to take the animal away.

A South Dakota man is accused of stealing $500 worth of sex toys from a couple’s home over a period of about two years.

A Massachusetts man fighting a speeding ticket in court had a unique explanation — the officer's radar gun may have picked up a deer.

If you want to purchase a new subscription:

Already a print subscriber, but you need digital access?