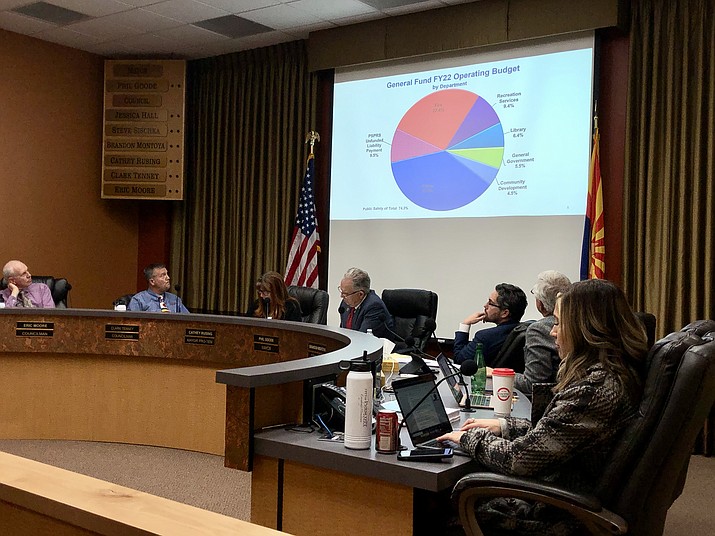 Members of the Prescott City Council listen to a mid-year budget report for the city’s current 2021/2022 fiscal year. The report from Budget and Finance Director Mark Woodfill was a part of the council’s study session on Tuesday, Feb. 22, 2022. (Cindy Barks/Courier)

That was the prediction from Prescott Budget and Finance Director Mark Woodfill on Tuesday, Feb. 22 during a mid-fiscal-year budget report to the Prescott City Council.

The report included an update on the city’s revenues and expenditures for the 2021/2022 fiscal year, as well as the schedule for the upcoming 2022/2023 budget discussions.

Among the points that Woodfill made during his presentation was that the city had “done a great job with the PSPRS (Public Safety Personnel Retirement System.)”

The growing debt with the pension fund had been taking up a larger and larger portion of the city’s general fund for years, until Prescott voters approved a 0.75% sales tax increase in 2017 to help pay down the debt.

Since then, that revenue has helped the city pay millions of extra dollars toward its pension debt.

The numbers for the current fiscal year, 2021-22, will not be reported by the PSPRS until December 2022. But Woodfill told the council earlier this year that he would be watching the situation closely in the coming months to determine when the pension debt would be paid down to the point that the city’s PSPRS-dedicated 0.75% sales tax could be retired.

Although Woodfill said that date is not yet certain, he told the council, “If I had to pick (a time for the end of the sales tax), it’s going to be sometime in the fall of this year, and if not, by Christmas.”

If that does happen, Woodfill noted that the end of the sales tax would come five years sooner than the December 2027 date that had been predicted back when voters approved the additional sales tax in 2017.

The Proposition 443 language stated that the 0.75% tax would be in effect “the earlier of Dec. 31, 2027, or at such time as the city’s PSPRS unfunded liability is $1.5 million or less as determined by actuarial value.”

By the time the city got the word from the PSPRS of the $22.3 million in actuarial liability in December 2021, it was already six months into the current fiscal year, which will end on June 30, 2022.

During this fiscal year, the city is expected to pay $14.8 million toward the debt from the dedicated sales tax revenue, as well as $3.1 million in the PSPRS Annual Required Contribution.

Woodfill has noted that once the city determines when it would be within the $1.5 million range of unfunded liability, it must notify the Arizona Department of Revenue about the need for a new tax rate, and the process for changing the tax rate would take 60 to 90 days.

All of that makes for a somewhat complicated process for determining when the 0.75% sales tax should be ended, and Woodfill has told the City Council that it would be virtually impossible to get the liability level to exactly $1.5 million.

Woodfill said his calculations on when the unfunded liability would get to the $1.5 million level include the expected $1 million-a-year contribution from the state for the next several years.

Woodfill’s report also noted that the city was on track with the budget-year projections on revenues and expenditures. (See related story.)

Staff-level meetings on the upcoming budget will continue through February, March, and April, and the City Council will conduct its budget workshop on May 17 and May 24 (if needed).