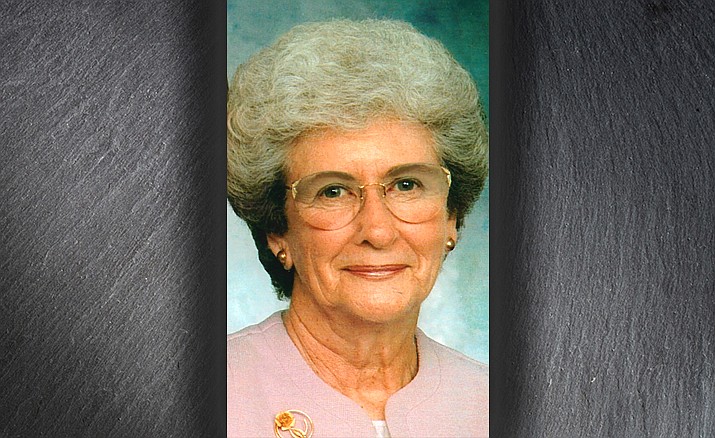 Marjorie L. Mastin was born to Arthur and Irene Covell in Chicago, Illinois and passed away peacefully at the Marley House at the age of 95 on January 31, 2022 in Prescott, Arizona. She and her parents left Chicago when she was two years old and traveled by car to Arizona and eventually settled on the Tempe desert.

She was preceded in death by her husband, Donald, of 75 years. Those left to mourn her passing are son Dick Mastin (Lynn), daughter Linda Walker (Del); grandsons, Darin, Don and Jeff and granddaughter Jeannie; 10 great-grandchildren and one great-great-grandchild.

She graduated from Phoenix Union High School in 1944. The following year she married Donald in Bellingham, Washington near the end of World War II, and they began their married lives in west Phoenix on the family dairy farm.

In 1964 Marjorie became an elementary school librarian and loved working with the children. The winter of 1973 she and Donald moved their farming operation to Chino Valley, Arizona. In 1986 she began working for the newly created Town of Chino Valley, eventually becoming Court Clerk and finally its first Magistrate Judge.

After retiring from the Town, she worked in the Chino Valley United Methodist Church for a number of years where she and Donald were charter members under the leadership of Pastor Bob Remp. She served in a number of capacities and they were very active with the Marriage Encounter group.

First and foremost she was a Mother like no other. An added joy was being an amazing Grandmother and Great-Grandmother. She was there with a listening ear, gentle hugs and always home-made cookies in the cookie jar. Her patience and giving was beyond compare. She took great pride in her homemaking skills especially as an outstanding cook and baker. Marjorie was a beautiful seamstress making clothes for the entire family and was highly adept at needlework.

The family requests any donations in memory of Marjorie be made to the Good Samaritan Prescott Hospice Marley House, 1065 Ruth Street, Prescott, AZ 86301.