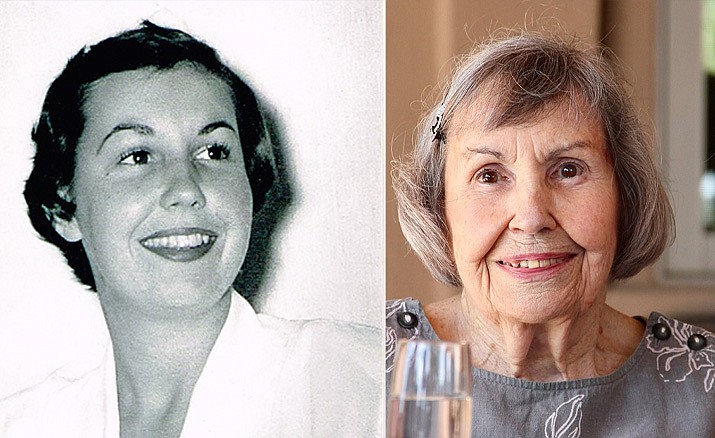 Jonne Pearson Markham, 95, died at home January 18, 2022 in Prescott, Arizona on a misty, rainy day. Arizonans love rain so we consider it a good omen, a good day to travel.

Jonne was born in the Philippine Islands in 1926 and grew up in Boise, Idaho and Seattle, Washington. She came from a long line of Irish, Scottish and Bavarian hoteliers, ranchers, shop keepers, butchers and miners who influenced their communities in generous and civic ways.

Jonne attended the University of Idaho. She majored in journalism and worked at the Shore Lodge at Payette Lake in McCall, Idaho after the war. She also wrote for the Idaho Statesman. In 1949, she was hired as the “school marm” at a western guest ranch called Smoke Tree Ranch to teach the children of families from around the country who wintered in Palm Springs. There she met Richard (Dick) Markham and they married in April, 1950. Jonne and Dick raised a family of five children in southern California which included two sets of twins back-to-back, plus one. They built a home in Solvang and founded Aquarium Pump Supply. Jonne learned to surf and water ski while keeping one eye on the five of us. In 1962, she and Dick moved their manufacturing business, five children, two horses, two dogs and two cats to Prescott. Soon after that, Jonne’s mother, Margaret Pearson joined the family. Once in Prescott, Jonne became active in Arizona politics and community service. She loved to cook and with five kids underfoot, she put us to work in the kitchen teaching us the joys of great food and good manners. We had a weekly chore chart which included setting the table, making the nightly salad, filling the dishwasher, and cleaning the kitchen.

Jonne loved to garden and taught many fledgling gardeners to properly plant bulbs and feed perennials. She was a big believer in feeding our gardens! She was a life-long bird watcher and an early member of the Prescott Audubon Society and The Nature Conservancy.

After Jonne’s children were mostly on their own, she went back to writing. In the 1970s, she was a feature writer for the weekly publication called The Paper. In addition, she was the editor and publisher of the Desert Rat; the annual Smoke Tree Ranch newsletter. She also marked up typos in any newspaper that crossed her hand. Jonne and Dick were generous hosts in their home on Country Club Drive; they encouraged and supported multiple generations in our community and made a significant impact on modern Prescott history. For many years, on January 1st, they opened their house for friends and family to gather. There were football games on TV, posole, hominy casserole, fish house punch and laughter. They also welcomed many Orme School students from around the globe to spend some time in a friendly home when they were missing their own homes most.

Jonne is preceded in death by her parents, Margaret and George Pearson, her husband of 52 years, Dick Markham and her sister, Marilyn Sharp.

She is survived by her son Fred Markham (MaryAnn), daughter Janet Markham (Bill Otwell), sons Richard and Charlie Markham (Sandy) and Marilyn Petrich (Al Petrich). Also by nine grandchildren, Morgan Gilliland, Fletcher and Max Otwell, Ben, Adriana and Elaina Markham, Brian Markham, Maggie Kitchell, Ryan Schmidt; and seven great-grandchildren. We wish to thank Jonne’s stellar team of caregivers who not only cared for her in every way these last years but fed her birds, walked her dogs, did her shopping and kept her surrounded in flowers. We also appreciate the many years Ted cooked creative and delicious meals for her. Team Jonne was the best!

There will be a funeral mass at Sacred Heart Church at 11:00 a.m., Friday, April 29, 2022. Masks will be required. Meanwhile, enjoy your days, love your families and be a good and true friend.