Prescott General Election Ballots To Be Mailed Out Oct. 6; Election Set For Nov. 2 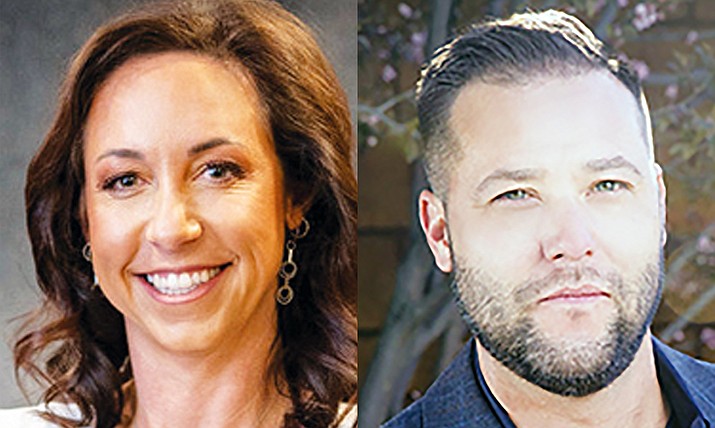 Grant Quezada has withdrawn from the November runoff election for a Prescott City Council seat, leaving Jessica Hall as the lone candidate on the ballot. (Submitted photos)

Even though the Prescott City Council race will no longer be contested, city ballots will still go out in the mail as planned in October, with one candidate listed.

In addition, the ballot will include a proposition on the extension of a franchise agreement with the UniSource natural gas utility.

With last week’s withdrawal from the Prescott City Council race by candidate Grant Quezada, the Nov. 2 General Election ballot will list only one candidate — Jessica Hall, who was the third-highest vote getter in the August city primary.

The ballot will also include Proposition 454, a measure asking voters whether the city should extend its franchise agreement for another 25 years with UNS (UniSource Energy).

The General Election comes after Prescott voters elected a mayor and two council members outright in the Aug. 3 primary.

Current City Councilman Phil Goode was elected as Prescott’s mayor in the primary, while the two top vote getters in the City Council race, Eric Moore and Brandon Montoya, were also elected outright by receiving a majority of the ballots cast.

As the third- and fourth-highest vote getters in the primary, Hall and Quezada were set to head to a runoff in the General Election to fill the third open seat on the council. But on Aug. 24, Quezada notified Prescott City Clerk Sarah Siep that he was withdrawing from the race.

Quezada said he believed Hall, a Certified Public Accountant, was the most qualified person to serve on the council.

Election officials say that General Election ballots will be mailed out to registered voters within Prescott city limits similar to the process used in the primary. As of Tuesday, Aug. 31, Yavapai County Registrar of Voters Laurin Custis reported that Prescott has 34,294 registered voters.

The ballots are scheduled to be mailed out to the registered voters on Oct. 6.

Meanwhile, voters should see the publicity pamphlet for the General Election in the mail in late September/early October. Siep said the pamphlets, which notify voters about what is on the coming ballot, are scheduled to be mailed out on Sept. 28.

The Runbeck Election Services company handles the production and distribution of the publicity pamphlets, and Custis noted that the county will provide information to the company by Friday, Sept. 3, on the mailing information.

Noting that the pamphlets are required be mailed to each household with registered voters, Custis said the number in Prescott is typically in the 16,000- to 17,000-household range.

The city’s website states: “UNS Gas, Inc. has submitted a proposed franchise to the City of Prescott for the purpose of supplying natural gas to the citizens of Prescott.” The franchise is subject to voter approval.

The franchise agreement gives a utility the authority to work within city rights-of-way to construct, operate, and maintain facilities for handling, production, transporting, storing, sale, and distribution of natural gas. The agreement would run for 25 years.

In exchange, the utility pays the city a franchise fee of 2% of revenues — an amount that Podracky said comes to a payment to the city of about $300,000 per year.

Although much of the proposed franchise agreement is similar to the one voters approved in 1997, Podracky said several changes were made to require better communication by UniSource with the Public Works Department on construction projects, in order to reduce conflicts with the city.

Along with the Nov. 2 deadline for ballots to be cast, other dates to remember in the General Election include:

• Oct. 4 — last day to register in order to vote in the General Election.